A+ A-
Print Email
One afternoon in mid-April, a Bedouin woman screamed inside her single-storey, stone house in the Egyptian village of al-Taweela. The screams were so loud that neighbors took notice, said Ali Abu-Freij, a resident in the northern Sinai village. He and other locals saw four men in masks speed away from the house in a Toyota Land Cruiser. 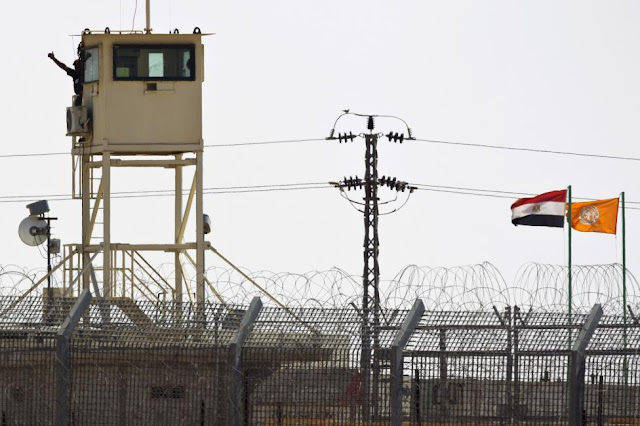 A member of Egypt's security forces gestures as he stands on a watchtower in North Sinai as seen from across the border in southern Israel in this July 2, 2015 file photo.

"When we went to the home to see what happened, we were surprised to find the husband tied up and saying that armed men had kidnapped his wife," said Abu-Freij.
The kidnappers – who had identified themselves as Sinai Province, the most lethal Islamist group in Egypt – vanished. But the following day, villagers found the 32-year-old woman's body nearby "with two gunshots in the head and a cut through her neck," said Abu-Freij. Two local tribal leaders said she had been raped. One of them, Mousa al-Delh, said a note found with the body said the woman had been killed because she had cooperated with the Egyptian army.
The kidnapping and murder were barely noted at the time and were not widely reported by Egypt's press. But the Egyptian army hopes the incident may prove to be a turning point in its struggle against Islamist extremists in the region. More than a dozen tribal leaders, outraged by the attack and other brutalities, now say they will join the battle against the militants, despite years of feeling neglected by the central government.
The Egyptian army needs all the help it can get. Sinai Province, the group behind the abduction of the Bedouin woman, has allied itself to the much bigger Islamic State, based in Syria and Iraq, and has carried out a series of increasingly bold raids. On July 1 militants carried out a coordinated attack against security forces that led to the fiercest fighting in the area in decades. Seventeen soldiers and more than 100 militants were killed, according to the official death toll.
Until now, the Bedouin tribes in the northern Sinai region have kept out of the fight, even as the militant groups have recruited from within their community. But the April attack was a profound insult, tribal leaders say. The militants violated a strict honor code, meaning the tribes could no longer stay silent. "For it to reach a point where they kidnap ... and rape her and the next day they behead her and put a note saying she was cooperating with the army ... it's absolutely barbaric," said Delh, who is from the Tarabeen tribe, one of the region's largest.
The government is struggling to maintain security, especially in the Sinai. Egyptian officials say some of the country's most dangerous militants established a foothold there during the rule of former President Mohamed Mursi of the Muslim Brotherhood.
Since seizing power from the freely-elected Mursi in the summer of 2013, following mass protests against his rule, President Abdel Fattah al-Sisi has taken on the Islamist militants. The campaign has left hundreds of police and soldiers dead. Two weeks ago, the country's top prosecutor was assassinated by a car bomb in Cairo in an attack that bore all the hallmarks of a militant operation.
Checkpoint attacks
Whether the Bedouin tribes will be enough to give the army an edge remains unclear. The tribes' local knowledge and influence will help as will the extra muscle they offer. Delh estimated the number of tribal fighters at around 300.
At the same time, tribal allegiances, business interests, and lingering resentment over military tactics often seen as heavy-handed will complicate efforts to form any new fighting force. Relatives of 21-year-old Egyptian army officer Mohamed Adel, who was killed in a militant attack in the Sinai peninsula, carry his coffin during his funeral in Al-Kaliobeya, near Cairo, Egypt, in this July 2, 2015 file photo.