A+ A-
Print Email
Japan is set to take part in joint naval exercises with India and the United States in the Indian Ocean in October, military and diplomatic sources said, a drill that so riled China eight years ago that Delhi has not since hosted such a multilateral wargame. 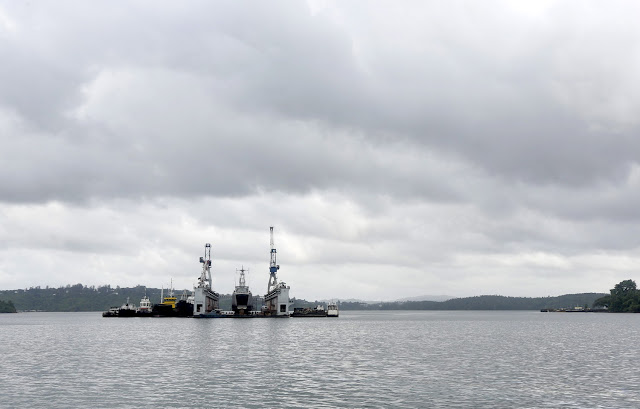 A floating dock of the Indian navy is pictured at the naval base at Port Blair in Andaman and Nicobar Islands, India, July 1, 2015. Photo: Reuters/Sanjeev Miglani

The Indian Ocean has emerged as a new arena of competition between China making inroads and India trying to recover its position as the dominant maritime power in the region.
New Delhi's decision to expand the "Malabar" exercises that it conducts with the United States each year to include Japan suggests a tightening of military relations between three major maritime powers in Asia, analysts said.


Military officials from India, the U.S. and Japan are meeting at a U.S. navy base in Yokosuka, near Tokyo, on Wednesday and Thursday to plan the exercises, a navy and a diplomatic source in New Delhi said.
A Japanese government official in Tokyo confirmed the meeting and said representatives from the three navies were discussing Tokyo's participation in the wargames. He declined to be identified.
The officials will decide the type of warships and planes the navies will deploy for the exercises in the Bay of Bengal in the northeastern Indian Ocean, said one of the sources familiar with the initial planning.
"They are discussing platforms, logistics and interoperability between the three naval forces," said the source. India and the United States have fielded aircraft carriers and nuclear submarines in previous bilateral exercises.
An Indian defense ministry official declined any comment on Malabar 2015, saying announcements will only be made closer to the event. A spokesman for Japan's Maritime Self Defense Force said no decision had yet been taken on Japan's participation.
Closer ties
Jeff Smith, a South Asia specialist at the American Foreign Policy Council, said Japan was keen to take part in the exercises this year at a time when it is expanding the role of its military against a more assertive China.
Indian Prime Minister Narendra Modi's inclusion of Japan after some hesitation was part of a trending pattern of forging close ties with the U.S. and its allies.
"I'd view aircraft carrier participation in this year's drill as yet another signal from the Modi government that it was shedding the (previous) government's anxiety about a more overt balancing posture toward China and a more robust strategic embrace of the U.S. and Japan," Smith said.
India last hosted a multilateral exercise in 2007 when it invited Japan, Australia and Singapore to join its drills with the U.S. navy in the Bay of Bengal, prompting disquiet in Beijing where some saw it as a U.S.-inspired security grouping in the making along the lines of NATO in Europe.
At the time, Beijing activated diplomatic channels seeking an explanation from the participating nations, said Gurpreet Khurana, Indian navy captain and executive director of the government-funded Maritime Foundation of India.
The exercises held in the Indian Ocean were scaled back in the following years, with India participating in three-way events only when it was away from its shores, such as last year's drills off Japan's Nagasaki coast.
An ocean of rivalry
But China's expanding naval footprint in the Indian Ocean including submarines docking in Sri Lanka, just off the toe of India last year, and again in Karachi in May, has prompted Modi's administration to accelerate naval modernization as well as shore up ties with maritime nations.
"Modi's Delhi is no longer willing to give Beijing a veto over its defense partnerships," said C. Raja Mohan, a top Indian foreign policy expert who has just published a book: "Modi's World: Expanding India's Sphere of Influence."
Just as China had overridden India's concerns about arch-enemy Pakistan and was building ports and roads under a $46 billion economic corridor, New Delhi was free to pursue closer security cooperation with the West and its partners, Mohan said.
The Indian Ocean has become the new global centre of trade and energy flows, accounting for half the world's container traffic and 70 percent of its petroleum shipments.
More than three quarters of China's oil transits through the Indian Ocean and its choke points such as the Malacca Straits, prompting its search for friendly ports and islands to secure the shipping lanes backed by an expanding Chinese navy, Chinese commentators say.
"India alone cannot assure the security of the Indian Ocean, even if it regards (it) as its backyard and wishes no one to compete with it there," wrote Zhou Bo, an honorary fellow at the Beijing-based Academy of Military Science in the China Daily.
"If the Pacific Ocean is big enough to accommodate China and the U.S., so is the Indian Ocean to accommodate India and China."