Julian Assange Reaches The End Of Netflix, Gives Himself Up

A+ A-
Print Email
WIKILEAKS founder and exile Julian Assange announced last night that he has finally finished watching everything there is on Netflix, stating he will give himself to the UK police later today.
The Australian, who turned 44 this month, has been living in the Ecuadorian embassy in London since June 2012 to avoid extradition to Sweden, where he faces allegations by two women of rape, sexual molestation and illegal coercion. 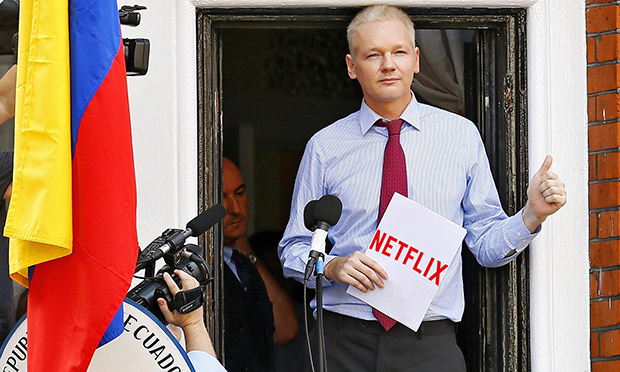 “As of 8.33pm, I regret to inform you all that I have officially reached the end of my Netflix account,” Assange told a large crowd gathered outside the embassy this afternoon. “I will be handing myself in to Scotland Yard once I’ve packed up all my blue shirts. I’d like to thank all my supporters for their continued support, and television shows like The Wire, Breaking Bad and House Of Cards for their creativity, inspiration and consistency over the many seasons they have remained on the air”.
It is understood Mr. Assange will be transported from the embassy to Scotland Yard headquarters in London at 6pm GMT, where he will be formally arrested under an extradition act. It is not known whether he had access to the US version of Netflix, or was just reliant on the restricted UK version.
“We suspect Julian may have used a program that allowed him to watch the movie providers extended US account,” a source close to the Wikileaks founder told WWN. “He became very depressed last night after reaching the end, and said he just wanted to give up his struggle”.
Mr. Assange is expected to be flown to Sweden to face his charges on Thursday.
Nhãn: Entertainment