A+ A-
Print Email
U.S. Secretary of State John Kerry said on Friday that he planned to discuss combating Islamic State militants in Syria and what role Iran could play when he meets with his Russian counterpart, Sergei Lavrov, in Qatar in coming weeks. 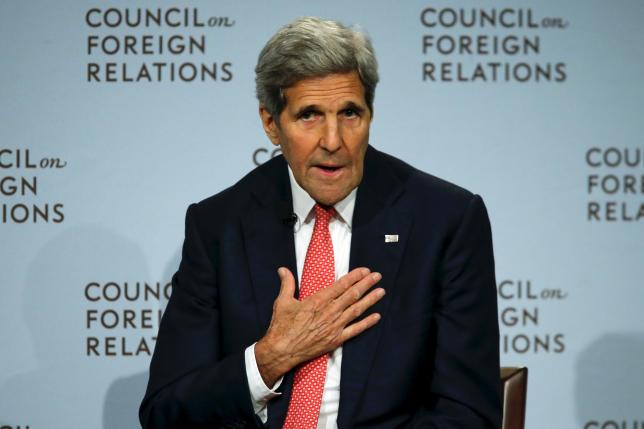 Kerry told the Council on Foreign Relations think tank in New York that "we have to change the dynamic in Syria" to kill off radical Islamic State, which has declared a caliphate in swathes of territory it has seized in Syria and Iraq.
"And that's part of why we have been negotiating with Turkey in these last weeks and now have some shift in what the Turks are prepared to do, and there is also a shift in some of the things that we're engaged in," Kerry said, without elaborating.
Turkish warplanes pounded Islamic State targets in Syria for the first time on Friday, and officials in Washington have said Turkey has agreed to let U.S. jets launch air strikes from a base near the Syrian border.
Kerry said he hoped to follow up with Lavrov on previous discussions about Syria.
"We want to bring the Saudis in, we want to bring the Turks in, and ultimately, probably, we will have to see what the Iranians are prepared to do," said Kerry.
Russia is trying to bring about rapprochement between the Syrian government and regional states hostile to it, including Saudi Arabia and Turkey, to forge an alliance to fight Islamic State.
Following a historic accord between world powers and Iran last week to curb Tehran's nuclear program, Kerry said, "both (Iranian) President (Hassan) Rouhani and Foreign Minister (Javad) Zarif have made it clear that with the agreement they are prepared to discuss the regional issues."
Kerry plans to travel to Doha in the next couple of weeks to meet with the Gulf Cooperation Council, which is made up of Saudi Arabia, the United Arab Emirates, Bahrain, Kuwait, Oman and Qatar.