Kim Kardashian Spotted Out On The Town Without Right Arm

A+ A-
Print Email
REALITY TV star Kim Kardashian wowed onlookers over the weekend, as the curvy beauty was spotted out and about in Los Angeles, missing her right arm from the shoulder down.
Sexbag Kim, wife of rap mogul Kanye West, showed off her daring new look while shopping in some of LA’s swankiest boutiques before heading for lunch with her sisters Khloe and Kourtney. 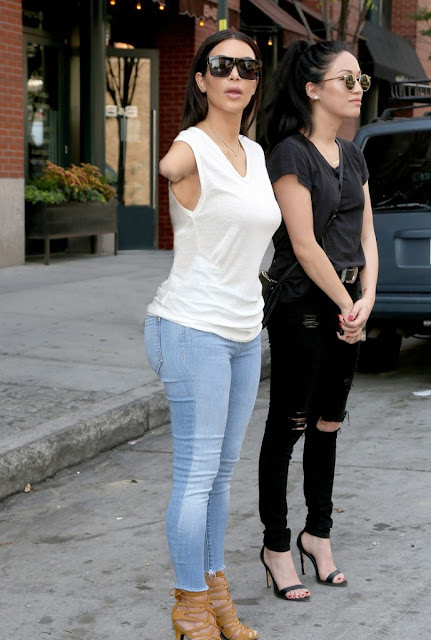 All eyes were on the E! star’s gaping shoulder socket as she sashayed around town, seemingly oblivious to the growing attention from both the public and the paparazzi. The buxom beauty refused to be drawn on questions as to where her arm had gone, leading to an online frenzy of speculation from media outlets and Twitter users alike.
“HASHTAG WHERE IS KIM’S ARM” cried blogger Harlan Kozinski, on his celebrity gossip website Hollywould.
“We need to know everything about this: did she lose the arm naturally, or have it surgically removed? Does she intend to remove the other arm as well? What did she do with the arm after she removed it? Was it her idea, or Kanye’s? Where does Caitlyn Jenner fit into all this? The public have a right to know!”
Members of the press have set up camp outside Kim’s Malibu mansion, hoping to catch a glimpse of the star as she embraces her new one-armed lifestyle. Photo’s uploaded by Kardashian to her Instagram account show the star in a variety of sexy outfits, along with messages about how she’s loving life without two arms to worry about.
More on this story as we get it.
Nhãn: Entertainment