A+ A-
Print Email
Inflatable boats crammed with camouflaged soldiers power onto a remote beach crawling with Australian, U.S. and Japanese commandos -- watched by officers from China. 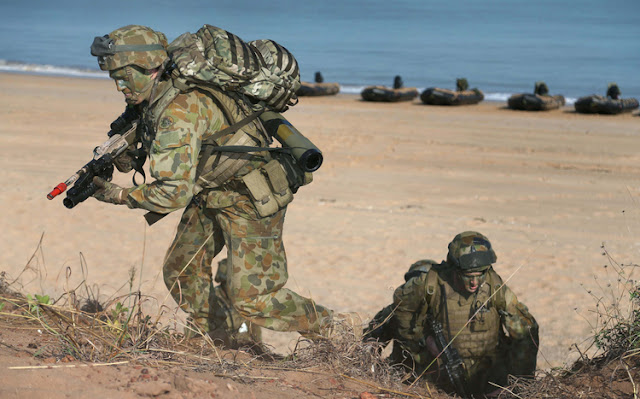 The drills in Australia’s remote Top End are the biggest war games in the military calendar as 30,000 personnel practice beach landings, parachuting and bush survival. Attended by Chinese observers, they reflect the delicate dance playing out in a region wracked by territorial tensions.
Tucked in the south of the Pacific, Australia nonetheless plays a significant role in regional security. The challenge for the country as a middle power in Asia is how to further build strategic ties with Japan, a mutual U.S. ally, without alienating China, its biggest trading partner.
The involvement of Japanese troops in the Talisman Sabre drills at Dundee Beach, 140 kilometers (87 miles) southwest of Darwin, risks annoying leaders in Beijing, according to Hugh White, a professor of strategic studies at the Australian National University in Canberra.
“The U.S., Japan and Australia are behaving more and more like they have a trilateral alliance and the reason for that is they want to respond to the challenge that China poses to the U.S.-led order in Asia,” White said. “The Chinese are well aware of this trend and they certainly don’t like it.”
As the exercises simulate a mid-intensity “high-end” war, thousands of miles to the north Japan’s government is moving to loosen the pacifist shackles of the country’s postwar constitution.
Deep unease
Last week, Prime Minister Shinzo Abe stared down opposition in parliament and public protests to push bills through the lower house that let Japan potentially come to the aid of allies. Abe’s efforts to build a bigger role for the military have caused deep unease in a country still coming to terms with what happened 70 years ago during World War II.
New Zealand is also taking part for the first time in the exercises, which feature more than 200 warplanes, three submarines and 21 ships. Yet 73 years after Japanese bombing raids killed hundreds of Darwin residents, it’s the presence of about 40 Japanese troops that’s garnering attention, alongside the handful of observers from China.
“I know the Japanese Imperial Army bombed Darwin,” Lieutenant Colonel Kuzuo Anamai says on the beach when asked about the historical significance of Japan’s involvement in Talisman Sabre. Anamai said he held “positive talks about the new relationship” with local officials.
Treading warily
“The rise of China definitely drove Japan to enhance defense relations with Australia,” said James Schoff, a researcher for the Carnegie Endowment for International Peace in Tokyo. Along with the U.S., the nations need to be wary of making China the focus of defense ties because “it increases the chance of confrontation.”
China is embroiled in a long running territorial spat with Japan in the East China Sea. It is conducting large-scale land reclamation in the South China Sea closer to Australia, waters that are also contested by a number of Southeast Asian nations and contain some of the world’s most important shipping lanes.
The U.S. military and China’s coastguard are coming into closer proximity in the South China Sea, while Australia has also patrolled the area.
U.S. forces
Standing on Dundee Beach, where soldiers hustled alongside bemused local residents and tourists heading out on fishing trips, Commander of the U.S. 3rd Marine Expeditionary Force, Lieutenant General John Wissler, welcomed Japan’s presence. “We are better together than we will ever be individually,” Wissler said.
China is one of 30 nations that sent observers, according to the Australian commander of joint operations, Vice Admiral David Johnston.
“The exercise is quite transparent,” Johnston said. “We are in regular contact with Chinese officials. There’s nothing in terms of the activities to give them any cause for concern.”
Sitting offshore, amphibious transport dock the USS Green Bay launches another wave of inflatable combat rubber raiding craft known as Zodiacs. Next to four boatloads of Marines conducting on-water surveillance is a vessel with eight Japanese ground self-defense force members.
Trade routes
The Japanese combined seamlessly with the U.S. and Australian components of the operation, according to the Green Bay’s commanding officer, Captain Kristy McCallum. The exercises are vital to secure regional trade routes, she said.
“You have to have confidence that if you’re doing this trade and you’re moving things about, that you’re going to be able to do so without interference,” said McCallum, who’s led operations in the past six months including maneuvers off the coast of Japan, Korea and the Philippines. The exercises sent a strong message “that we’re here and it matters,” she said.
Taking time out from selling cakes to tourists thronging the beach to view the drills, local resident Libby Bremner, 67, said she was pleased Japan was involved.
“The war was a long time ago,” she said. “There’s other baddies out there now.”