A+ A-
Print Email
Mexico's government on Tuesday broadcast security camera footage of fugitive drug lord Joaquin "El Chapo" Guzman in the final moments before he escaped from a maximum security prison through a tunnel in his cell on Saturday night. 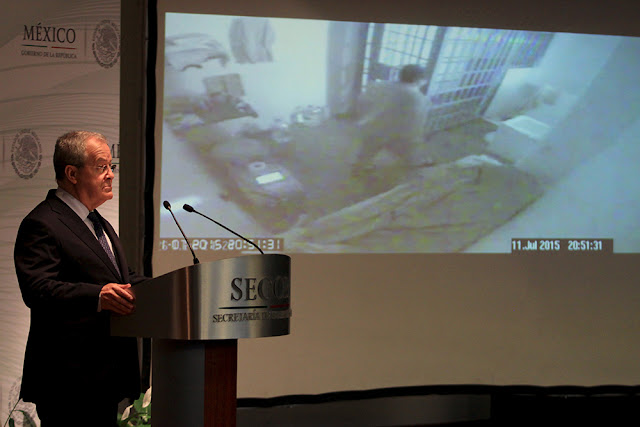 National Security Commissioner Monte Alejandro Rubido showed a grainy video of a dressed Guzman pacing the room, looking behind the partition wall by his shower, sitting on his bed, then crouching again behind the wall, where he finally disappeared from view at 8:52 p.m. local time.

"He changed his shoes, and went to the shower," Rubido said, explaining the footage. "You can't see what he's doing."
The partition wall blocked the camera's view of a roughly 50-cm (20 inch) by 50-cm entrance hole to the mile-long tunnel shown by Mexican television earlier on Tuesday. It was one of two blind spots for the security cameras in Guzman's cell.
The escape of Guzman, Mexico's most notorious drug lord, is a major embarrassment for President Enrique Pena Nieto, and was the second time the drug kingpin had broken out of prison.
Up until his departure, Guzman's behavior had been "normal" for a person who spent many hours in a small cell, Rubido said.
The commissioner said the blind spots were designed to permit Guzman some privacy while he was washing.
The video footage showed the partition wall was high enough to cover the lower half of Guzman's body while standing.
The jail break occurred just as Pena Nieto began a four-day state visit to France. Guzman's first jail break was in 2001.


A photographer exits a tunnel connected to the Altiplano Federal Penitentiary and used by drug lord Joaquin 'El Chapo' Guzman to escape, in Almoloya de Juarez, on the outskirts of Mexico City, July 14, 2015. Photo: Reuters/Edgard Garrido