A+ A-
Print Email
A NEW trailer for the latest James Bond movie has wowed audiences across the globe, and given moviegoers a glimpse at a plot which involves 007’s past coming back to haunt him after he takes a trip to the Sexual Health clinic. 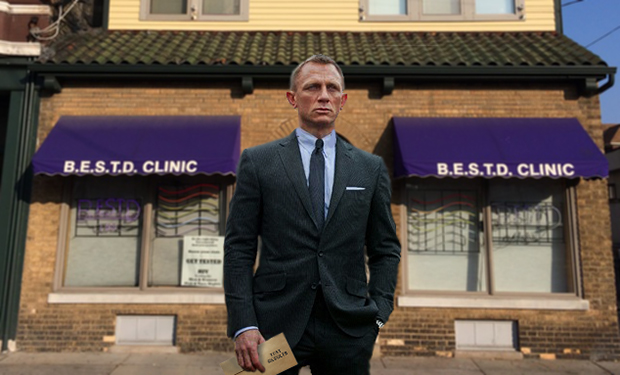 SPECTRE, the 24th instalment in the 50-year franchise, will show Bond coming to terms with a positive HIV diagnosis following years of casual sex with a succession of strange women.
Earlier trailers suggested that the new movie would be a standard espionage romp with Bond tackling the nefarious crime syndicate known as Spectre, but the latest 3 minute promo has highlighted a more personal struggle as he comes to terms with a massive shock to the system.
“The standard pre-credits Bond opening is there, but it’s got less jet-skis and helicopters, and more of Bond just feeling unwell for no particular reason,” said Dave Bautista, who plays a henchman known as Hinx.
“The story then follows Bond as he learns that years of sleeping with strangers has left him HIV Positive, and we follow him as he comes to terms with that diagnosis, adjusts his lifestyle and his diet, and goes on a course of drug treatment to keep the disease from developing into full blown AIDS. Then, I fight him on the roof of a train”.
Future adventures with Bond will involve the same level of action that fans have grown to love, although the gentleman spy will use more protection when bedding the ladies from now on.
Nhãn: Entertainment