A+ A-
Print Email
CASUALTIES in the ongoing feud between pop stars Nicki Minaj and Taylor Swift continue to pile up, with the death toll now reaching into the thousands following another night of heavy shelling.
Swift and Minaj, who have been engaged in the fierce online fighting following the nominations for Video of the Year at the upcoming MTV Video Music Awards, launched devastating airstrikes at one another, resulting in widespread civilian fatalities and injuries. 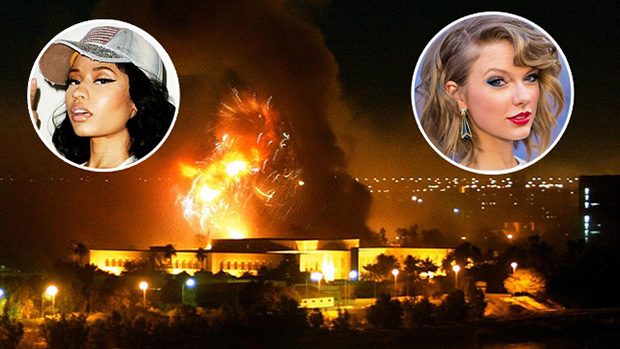 Claiming that the video for her hit ‘Anaconda’ was snubbed by MTV due to race and gender issues, Minaj found herself encroaching on territory belonging by Swift, whose ‘Bad Blood’ promo swept the nominations board.
As diplomatic talks broke down between the pair, supporters of both stars took up arms and engaged in fierce fighting, resulting in a catastrophic loss of life which shows no signs of stopping.
The fighting has been condemned by humanitarian groups across the globe, who claim that both sides have contravened the rules of pop star warfare set out by the Los Angeles Convention.
“Civilians: women, children, the elderly… have all been affected by the constant shelling,” said one humanitarian worker, standing in the ruins of a school which was destroyed by artillery fire from both sides.
“Meanwhile, the media are refusing to report on the situation on the ground here: they’re too busy reporting on some frivolous nonsense to actually get the news out that there are people here dying every hour,” the humanitarian added.
Troubling videos have emerged from the Minaj camp showing a Taylor Swift fan being held hostage, along with a message that they will be beheaded if Anaconda doesn’t at least get a Best Choreography nomination.
Nhãn: Entertainment