A+ A-
Print Email
U.S. President Barack Obama and the head of the Communist Party of Vietnam discussed concerns over China's activities in the East Vietnam Sea during a historic White House meeting on Tuesday, marking two decades of engagement between the former foes. 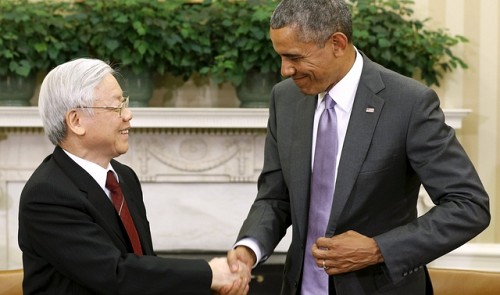 Nguyen Phu Trong met with Obama in the Oval Office, where they had "candid" discussions over differences as well as a pending Pacific trade agreement with the region, Obama said.
Trong, one of the most powerful figures in Vietnam, invited Obama to visit his country and said he was grateful that the president had graciously accepted. Obama said he looked forward to going to Vietnam, but no date was announced.
The Vietnamese leader's trip took place after a dispute over sovereignty erupted between Vietnam and China in May 2014.
Washington took advantage of the row, ramping up diplomacy with Hanoi after China parked an oil rig unannounced in waters that Vietnam considers its domain.
Obama said the U.S.-Vietnam relationship was based on mutual respect and said in the last two years alone "significant progress" had been made in cooperation on education, climate change, public health and security.
In a nod to Vietnam's concern about China, Obama said the East Vietnam Sea dispute needed to be resolved using international rules.
The goal was to "ensure that the prosperity and freedom of navigation that has underwritten the enormous economic growth that’s taken place in the region continues for decades to come," Obama said.
Trong, without naming China specifically, said he had shared the Vietnamese concern about the East Vietnam Sea and "the recent activities that are not in accordance with international law that may complicate the situation."
China has laid stake to nearly all of the East Vietnam Sea, while Vietnam, the Philippines, Malaysia, Taiwan and Brunei claim overlapping parts of it.
Landmark meeting
Both men noted that the United States and Vietnam had made strides in their relationship.
"There continue to be significant differences in political philosophy and political systems between our two countries," Obama said, adding diplomacy would help overcome disagreements.
Trong said 20 years ago few would have imagined a substantive meeting between the countries' leaders.
"We have been transformed from former enemies to become friends, partners, comprehensive partners. And I’m convinced that our relationship will continue to grow in the future," he said through an interpreter.