A+ A-
Print Email
DESPITE a nobel and at times heroic attempt to make small-talk with a man he just met, time is running out for one Carlow man as his conversation with his girlfriend’s dad about the price of car insurance has begun to reach its conclusion.
Martin Cassidy had gone to the house of his new girlfriend Majella Rooney to collect her for a date, who introduced him to her dad and left them alone in the sitting room as she needed ‘two minutes’ to put on her make-up. 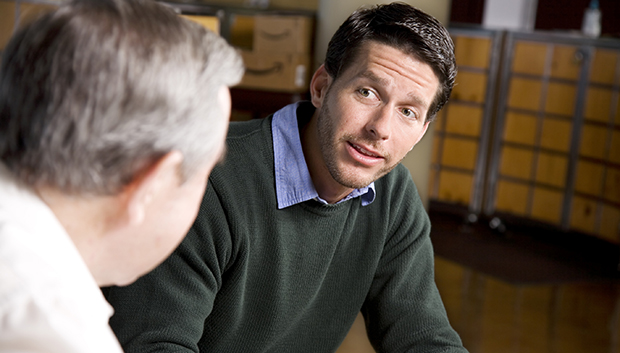 Cassidy made a game attempt to engage with Michael Rooney, although the awkward and irrefutable knowledge that Cassidy was either banging or intended to soon bang Rooney’s daughter hung heavily in the air.
Hope emerged after the duo struck up a conversation about car insurance, as Cassidy had recently renewed the policy on his 2007 Golf. Talk about the exorbitant prices charged to young drivers continued into tales of how one may be able to get a cheaper quote from the same broker if “you ring back and give them a different name”.
Sensing that the topic has been exhausted and is drawing to its natural conclusion, Cassidy has begun to panic and is wondering what the fuck is keeping Majella, and will she return before the conversation turns to GAA.
“I know fuck all about GAA, so I’d better keep the craic going about how I’m still being charged over 500 euro despite ten years no-claims bonus,” thought Cassidy, desperately looking around the room for something that he could change the topic of conversation to.
“Ever where the fuck Majella got to… doesn’t she not know that two strange men can’t hold a conversation longer than 5 minutes without it turning into a total cringe fest?”
With his soon-to-be ex-girlfriend nowhere in sight, Cassidy was forced to resort to talking about the weather, which may buy him a few more minutes of painfully embarrassing conversation before he has to sit in total silence staring at the walls.
Nhãn: Lifestyle