Taliban wound 21 Afghans, kill one in attack on NATO convoy

A+ A-
Print Email
A Taliban suicide car bomb attack on a convoy of NATO troops in Kabul on Tuesday wounded 21 Afghan civilians and killed one, police and witnesses said. 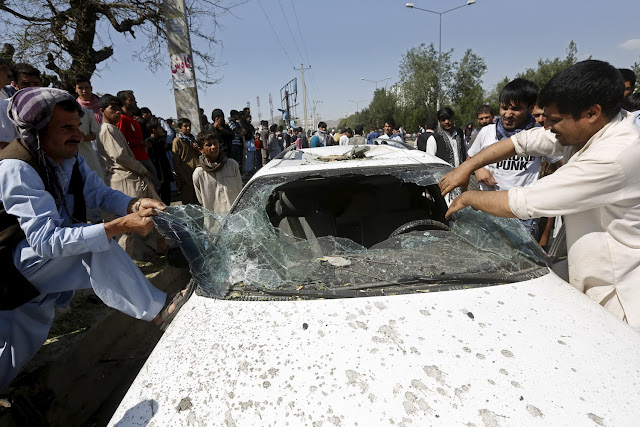 Afghan men remove the broken window of a car at the site of a suicide bomb attack in Kabul, Afghanistan, June 30, 2015. Photo: Reuters/Omar Sobhani

Two coalition soldiers suffered light wounds, a U.S. public affairs officer said in a statement. The troops had been traveling in armored vehicles specially designed to withstand mines and roadside bombs, while the Afghan casualties were mostly pedestrians outside a row of shops.
A Reuters witness saw U.S. troops attending to a stricken comrade lying on the ground close to the blackened and mangled wreck of one of the vehicles.


A Taliban spokesman used Twitter to claim responsibility for the attack, saying an American vehicle had been destroyed.
Far to the south, another Taliban suicide attack targeted a police headquarters in Helmand province, killing two people and wounding more than 50.
Most foreign troops left Afghanistan last year when the combat mission ended and only a small NATO contingent remains to train Afghan security forces. Some U.S. troops are still engaged in fighting the Taliban insurgency.
Violence has escalated across the country this year and Afghan civilians are bearing the brunt of the conflict, with over 1,800 casualties recorded by the United Nations in the first three months of the year.
The health ministry said five of the wounded in the Kabul attack were in a serious condition and children were among the casualties.
The attacker used a Toyota saloon and struck as the convoy of three trucks passed a row of shops on the main road running between the airport and the U.S. embassy.
"A suicide bomber in a Corolla detonated his car loaded with explosives near coalition force's convoy," police spokesman Ebadullah Karimi said.
The force of the blast rattled windows in the capital's heavily guarded diplomatic enclave and sent a huge column of grey smoke skywards.
It was the second major attack in the capital since the start of Ramadan. The Taliban had rejected a request for a ceasefire during the Muslim fasting month, and the militants' summer offensive has continued unabated despite exploratory talks earlier this year between Afghan and Taliban officials in Qatar.
Last week, militants mounted an assault on the parliament as lawmakers prepared to vote on a new defense minister.
Omar Zwak, the spokesman for Helmand's governor, told Reuters that a militant had detonated his car bomb outside the police headquarters to allow two other militants to gain entry.
"Another detonated explosives attached to his body and the third one was shot and killed by security forces," Zwak said.