A+ A-
Print Email
Turkish fighter jets early Friday bombed positions of Islamic State jihadists insideSyria for the first time, in a dramatic escalation of fighting after the killing of a Turkish soldier in cross-border clashes. 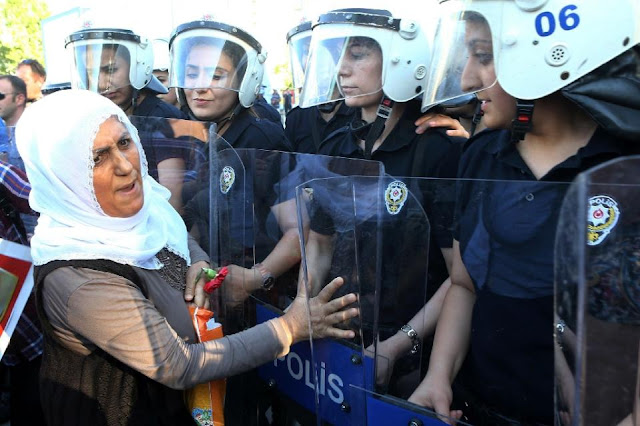 Members of the Peace Mothers face police officers during a protest on July 23, 2015 in Ankara to denounce a suicide bombing that killed 32 people in a Turkish town on the Syrian border, blamed on IS

Three Turkish F-16s took off from the southeastern Turkish city of Diyarbakir for an early morning bombing raid against three IS targets, dropping four guided bombs, a statement from the prime minister's office said.
The operation came after the first major cross-border clashes between Turkey and IS jihadists on Thursday left one Turkish soldier and one militant dead, thrusting Turkey into an open conflict with the Islamists.
The bombing raid was the first by the Turkish air force on IS since the Islamists began their advance across Iraq and Syria in 2013, seizing control of swathes of territory right up to the Turkish border.
It also came as Turkey, after months of negotiations, finally gave the green light for the US to use a key air base in its south for its air strikes against IS.
The decision to launch the Turkish air force's operation was taken at a meeting of security officials in Ankara late Thursday chaired by Turkish Prime Minister Ahmet Davutoglu.
"In this context.... an operation was carried out against targets belonging to Daesh inside the Syrian border," the statement said, using an Arabic acronym for the group.
"Three of our F-16s hit... three targets belonging to Daesh," it said, adding that "the government of the Turkish Republic is determined to take the necessary measures to protect national security".
The planes dropped their bombs just before 4:00 am local time (0100 GMT) and all returned safely to their base.
On Thursday, one Turkish soldier was killed and two sergeants wounded in the Kilis region by fire from IS militants on the Syrian side of the border. A jihadist was also reported dead.
Turkish tanks then responded by opening fire on IS targets in Syria.
Militants raided in Istanbul
The fighting erupted after the killing of 32 people in a suicide bombing Monday in a Turkish town on the Syrian border that the government blamed on IS.
This sparked an upsurge in violence in Turkey's Kurdish-dominated southeast, where many accuse the Turkish authorities of collaborating with IS, accusations Ankara denies.
Turkish police on Friday launched raids to arrest suspected members of the IS group and Kurdish militants, in an apparent bid to stamp down on all sources of violence.
A total of 251 people were detained, the prime minister's office said in a statement, adding that the raids took place in 13 provinces across Turkey.
Police had raided addresses in several Istanbul districts in search of members of IS, the Kurdistan Workers Party (PKK) and other militant groups.
The Dogan news agency said some 5,000 police were involved in the Istanbul operation.
As well as IS and the PKK, the operation targeted suspected members of the PKK's youth wing the The Patriotic Revolutionary Youth Movement (YDG-H) and the Marxist Revolutionary People's Liberation Party Front (DHKP-C), Anatolia said.
A female member of the DHKP-C was killed in Istanbul in clashes with police during the raids, the agency said.
Two police had been shot dead in southeast Turkey close to the Syrian border on Wednesday, in an attack claimed by the PKK's military wing which said it wanted to avenge the Suruc bombing.
On Thursday, another policeman was killed in the majority Kurdish city of Diyarbakir.
Meanwhile, the YDG-H claimed it had shot dead an alleged former IS fighter in Istanbul late Tuesday and threatened further assassinations.
'Deal on key air base'
Turkey has been accused of colluding with IS extremists in the hope they might prove useful in its aim of knocking out Syrian President Bashar al-Assad. Ankara has always vehemently denied the claims.
NATO member Turkey has also fallen far short of playing a full role in the US-led coalition assisting Kurds fighting IS militants, much to the chagrin of its Western allies.
However Ankara has finally given the green light to US forces for use of its Incirlik base for air strikes against IS in Syria and Iraq, American officials said Thursday
The Hurriyet daily said that the accord was finalised in telephone talks Wednesday between President Recep Tayyip Erdogan and his US counterpart Barack Obama.
The New York Times said the agreement, which would allow manned and unmanned US warplanes to use Incirlik for raids against IS, was described by a senior administration official as a "game changer".