A+ A-
Print Email
Ukraine and pro-Russian separatists have reached a preliminary agreement to extend a pull-back of weapons in east Ukraine to include tanks and smaller weapons systems, the chairman of the OSCE security watchdog, Ivica Dacic, said on Tuesday. 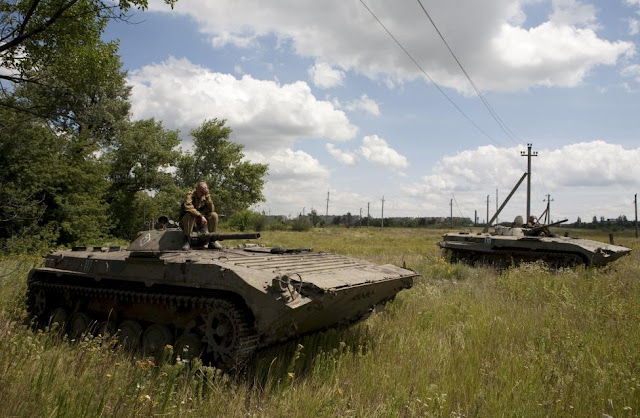 Members of the self-proclaimed Donetsk People's Republic forces sit on armored vehicles after withdrawing them further from the frontline in a field on the suburbs of Debaltseve in Donetsk region, Ukraine, July 21, 2015.

Under a ceasefire agreement brokered in Minsk, Belarus, in February, weapons of over 100 mm caliber are meant to have already been withdrawn, but both sides accuse the other of continuing to use heavy artillery and casualties are reported almost daily.
The latest agreement on lighter weapons was reached at a meeting of the so-called "contact group" involving Ukraine, Russia and the separatists under the auspices of the Organization for Security and Cooperation in Europe.
Speaking in Minsk, Dacic said the deal still needed to be signed, but urged all sides to "completely cease attacking and respect a full ceasefire".
Earlier, separatists said a civilian and a rebel fighter had been killed in shelling by Ukrainian forces in the past 24 hours, while Ukraine's military reported a serviceman had been killed in rebel attacks.
More than 6,500 people have been killed since the conflict broke out in eastern Ukraine in April last year.