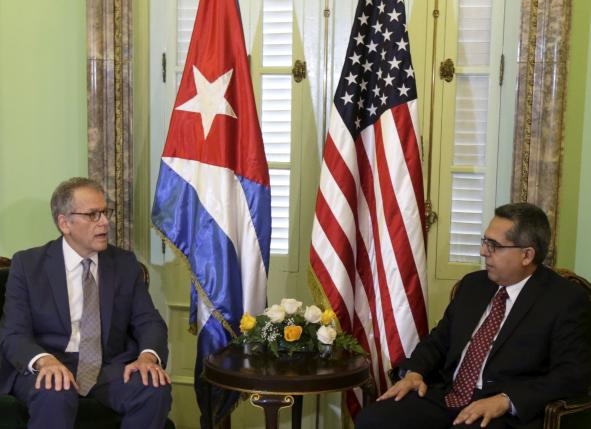 Cuba's foreign ministry cited a letter, which Obama addressed to Castro, that it received from the senior U.S. diplomat in Havana.
Obama was due to speak at 11 a.m. from the White House's ceremonial Rose Garden on the historic rapprochement with Cuba, as the two countries moved ever closer to restoring diplomatic ties that had been severed for 54 years.
It was unknown whether Castro would reciprocate with comments of his own.
A formal announcement would fulfill a pledge made 6-1/2 months ago, when Obama and Castro first announced detente.
Jeffrey DeLaurentis, chief of the U.S. interests section, handed the letter to Cuba's interim foreign minister, Marcelino Medina, at the Cuban foreign ministry. The two shook hands in front of Cuban and U.S. flags.
The Cuba deal marks a major achievement for Obama, who has been criticized for foreign policy stumbles, especially in the Middle East. It follows his recent victory in a congressional fight for fast-track authority that could undergird a landmark Asia trade deal and comes as Washington appears to be on the cusp of a nuclear agreement with Iran.
Following 18 months of secret negotiations brokered by Pope Francis and Canada, the two leaders announced separately but simultaneously in December that they planned to reopen embassies in each other's capitals and normalize relations.
U.S. Secretary of State John Kerry is expected at a flag-raising ceremony in Havana later this month, when the U.S. interests section will become a full embassy. Cuba's mission in Washington will undergo a similar upgrade.
The deal in December also included a prisoner swap and sought to relegate to history 56 years of recriminations that have predominated ever since Fidel Castro's rebels overthrew the U.S.-backed government of Fulgencio Batista on Jan. 1, 1959.
Two years later, President Dwight Eisenhower closed the U.S. Embassy in Havana on Jan. 3, 1961, less than three weeks before President-elect John F. Kennedy was due to take office.
By April of that year, Kennedy would authorize the U.S.-organized invasion of Cuba by a force of Cuban exiles. The attack at the Bay of Pigs failed and reinforced Castro's standing at home and abroad.
In October 1962, Washington and Moscow nearly came to nuclear war over Soviet missiles stationed in Cuba.
Ever defiant toward his neighbor just 90 miles (145 km) to the north, Fidel Castro, 88, remained in power until 2008, when he handed off to his younger brother Raul Castro, 84.
With diplomatic relations restored, the United States and Cuba will turn to more difficult bilateral problems.
Major obstacles include the comprehensive U.S. economic embargo of Cuba and the U.S. naval base at Cuba's Guantanamo Bay, which the United States has leased since 1903. Cuba wants the 45 square miles (116 square km) returned as full sovereign territory.
Obama, a Democrat, has asked the Republican-controlled Congress to lift the 53-year-old embargo, but the conservative leadership in Congress has resisted.