A+ A-
Print Email
Australia will spend A$89 billion ($65 billion) on ships and submarines for its navy over the next 20 years but pressure grew on Prime Minister Tony Abbott on Tuesday to spend more than half that total building a new submarine fleet domestically. 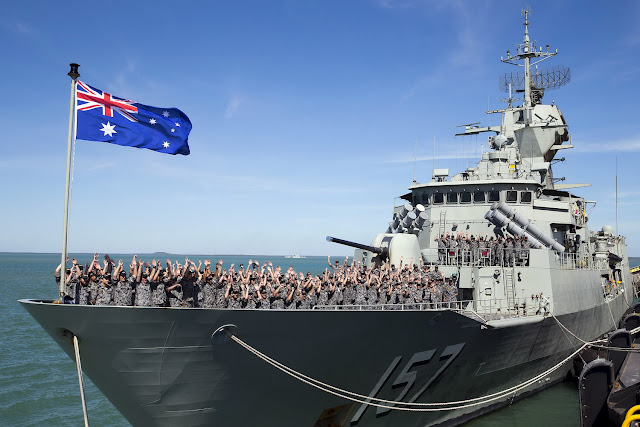 The crew of the Royal Australian Navy Anzac class frigate HMAS Perth cheer as they arrive at the Northern Australian city of Darwin in this picture taken on July 3, 2015. Photo: Reuters/Australian Defense Force/Handout via Reuters

Two naval shipbuilding programs, the A$20 billion SEA5000 Future Frigate project and the SEA1180 Offshore Patrol Vessels, would be brought forward to guarantee the continuous domestic construction of surface warships, Abbott said.
Despite that new component, Abbott is facing intense pressure from within his conservative Liberal Party, state officials and labor unions to ensure that a A$50 billion stealth submarine program is built domestically.
The submarine bid, one of the most lucrative defense contracts in the world, will be considered separately. Germany's ThyssenKrupp (TKMS), France's state-controlled naval contractor DCNS and a Japanese government consortium of Mitsubishi Heavy Industries and Kawasaki Heavy Industries are bidding for that contract.
TKMS is wooing anxious members of the government with the economic and political benefits of its proposal despite growing concerns about the potential political repercussions of awarding the contract to an overseas bidder.
A Japanese government team is in talks with Britain's Babcock International Group and BAE Systems in response to Australia's desire to have as much domestic participation in the project as possible.
Tuesday's announcement drew sharp criticism from South Australia state and from a powerful trade union.
South Australia, a naval and automotive manufacturing hub, is struggling with the nation's highest unemployment rate.
Abbott announced the deal in the state capital, Adelaide. Martin Hamilton-Smith, South Australia's minister for defense industries, asked why the submarines could not also be built there if the frigates are built at existing shipyards.
The powerful Australian Manufacturing Workers' Union (AMWU) signaled it would hold Abbott to a pledge before elections in September 2013 that the submarines would be built in Australia.
"A promise is a promise is a promise, and we will be holding them to honor the submarine promise right up until the next election," AMWU Assistant National Secretary Glenn Thompson said in a media release.
Abbott is also eager to deepen security ties with Japan, reflecting a U.S. desire for its two allies to take a bigger security role in Asia as China's military grows.