A+ A-
Print Email
Sixteen policemen died on Tuesday when a helicopter likely crashed into the side of a mountain in a wooded region of northwestern Colombia, Defense Minister Luis Carlos Villegas said. 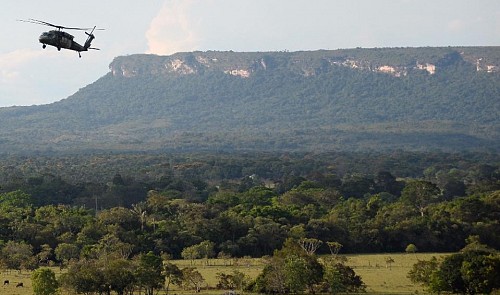 A Colombian military helicopter overflies a base in La Macarena, Meta department, on October 30, 2014.

The U.S.-made UH-60 Black Hawk may have crashed because of bad weather or a mechanical failure while taking part in a counter-narcotics operation in the department of Antioquia some 450 km northeast (280 miles) of the capital, Bogota. The incident is under investigation, he said.
"For now the most probable hypothesis is that the helicopter crashed against the side of the mountain, possibly due to low cloud cover," Villegas told reporters in Bogota.
The accident came four days after 11 soldiers died when a Spanish-made CASA C-235 suffered motor failure and crashed in the northeast of the country.
The policemen killed on Tuesday were taking part in a crackdown on a criminal gang of former right-wing paramilitaries known as Clan Usuga.
The head of the group, Dario Antonio Usuga, alias "Otoniel," leads 2,000 men. The United States is offering a reward of up to $5 million for information leading to his capture.
"There were three helicopters in the operation, and the other two didn't hear any shots fired apart from those from the three helicopters (in the operation)," Villegas said.
Colombia's security forces have dozens of Black Hawk helicopters that are used in the government's offensive against leftist guerrillas, criminal gangs and drug traffickers.