A+ A-
Print Email
U.S. Secretary of State John Kerry expressed his concern about China's land reclamation and construction on man-made islands in the disputed East Vietnam Sea during talks with his Chinese counterpart on Wednesday, a senior State Department official said. 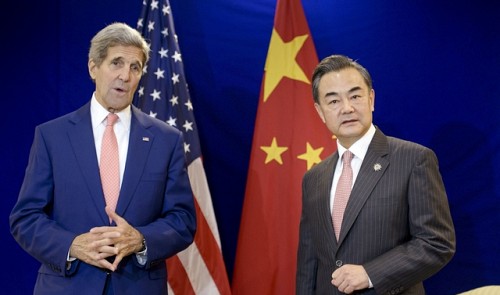 Kerry made the remarks to Foreign Minister Wang Yi in Kuala Lumpur on the sidelines of meetings involving the 10-member Association of Southeast Asian Nations (ASEAN), where tensions in the East Vietnam Sea have taken centre stage.
The official said Kerry told Wang that while Washington did not take a position on sovereignty claims in the strategic waterway, it wanted to see them resolved peacefully and in accordance with international law.
Kerry also reiterated U.S. concerns over the "militarisation" of features on the Chinese-held islands in the Spratly archipelago of the East Vietnam Sea, the official added.
"He encouraged China, along with the other claimants, to halt problematic actions in order to create space for diplomacy," the official said.
In brief remarks to reporters after his talks with Kerry, Wang said China would pursue "peaceful discussions" to resolve the East Vietnam Sea dispute. He did not elaborate.
Recent satellite images show China has almost finished building a 3,000-metre-long (10,000-foot) airstrip on one of its seven new islands in Vietnam's Truong Sa (Spratly) archipelago.
The airstrip will be long enough to accommodate most Chinese military aircraft, security experts have said, giving Beijing greater reach into the heart of maritime Southeast Asia.
China claims most of the East Vietnam Sea, through which $5 trillion in ship-borne trade passes every year. The Philippines, Vietnam, Malaysia, Taiwan and Brunei have overlapping claims.
Wrangling over wording
China had said it did not want the East Vietnam Sea dispute raised at this week's ASEAN meetings, but some ministers, including from host Malaysia, rebuffed that call, saying the issue was too important to ignore.
In a statement, Japan's senior vice foreign minister Minoru Kiuchi "voiced deep concern over unilateral actions that change the status quo and heighten tensions in the [East Vietnam Sea], including large-scale land reclamation, the construction of outposts and their use for military purposes."
Despite strong public comments by several Southeast Asian ministers about the need to reduce tensions, the grouping had yet to issue a customary communiqué following annual talks between its foreign ministers on Tuesday.
"On the [East Vietnam Sea], I think we are probably nearing a formulation," said Jakkrit Srivali, director-general of the ASEAN department at Thailand's Foreign Affairs Ministry.
Other issues had also held up the statement, he said without elaborating. A communiqué was expected at the end of joint meetings between ASEAN, the United States, China, Japan and other countries on Thursday, senior officials said.
China and Southeast Asian nations had agreed to set up a foreign ministers' hotline to tackle emergencies in the waterway, a senior ASEAN official said on Friday. This was expected to be contained in the communique.
Wang was due to hold talks with ASEAN foreign ministers later on Wednesday.
On Monday, he described calls for a freeze in activity in the East Vietnam Sea as "unrealistic".
Kerry told his ASEAN counterparts in a separate meeting that Washington wanted to see stability in the East Vietnam Sea.
"We want to ensure the security of critical sea lanes and fishing grounds and to see that disputes in the area are managed peacefully and on the basis of international law," Kerry said.
China has shown no sign of halting its construction on artificial islands in disputed areas.
It has accused the United States of militarising the East Vietnam Sea by staging patrols and joint military drills.
The senior State Department official said Kerry and Wang also discussed Chinese President Xi Jinping's visit to the United States in September, as well as U.S. concerns over cybersecurity and human rights in China.
"They agreed there are many shared challenges that both countries should work closer together to address, such as climate change and development, and that more dialogue and cooperation between the United States and China remains vital," the official said.