A+ A-
Print Email
A Syrian military aircraft crashed while on a bombing run over the rebel-held northwestern town of Ariha on Monday, leaving at least 31 people dead, a monitoring group said. 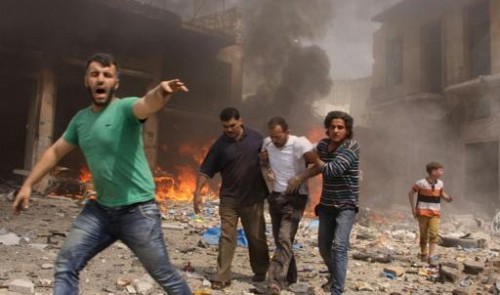 The Syrian regime has been accused of launching barrel bomb attacks on rebel-held areas, such as this raid on the northern city of Aleppo, on June 3, 2015.

The Syrian Observatory for Human Rights said it was not immediately clear how many of the dead were from the crash and how many from the prior bombardment.
"It was flying at a low altitude when it had a mechanical failure," Observatory chief Rami Abdel Rahman said.
"At least 31 people, including two children, were killed. Five of them have not been identified," said Abdel Rahman, citing medical officials and residents inside the town.
He added that at least 60 people were wounded.
Residents cited by the Observatory said the plane had crashed near a vegetable market, causing "a huge blast".
The Observatory, which relies on a wide network of activists, medics, and fighters throughout war-torn Syria, said the fate of the pilot was unknown.
The Damascus regime has relied heavily on its monopoly of air power in the four-year-old civil war, repeatedly pounding rebel-held towns.
It has lost a number of aircraft, some to rebel fire, some to mechanical failure.
In mid-January, at least 35 government troops were killed when a military aircraft crashed in Idlib.
The province, which borders Turkey to the north, has since been largely overrun by a rebel alliance including Al-Qaeda affiliate Al-Nusra Front.
The Army of Conquest seized Idlib city on March 28, beginning a string of victories in the province including the capture of Ariha exactly two months later.