A+ A-
Print Email
Hundreds of Syrian migrants on the Greek island of Kos on Sunday began boarding a passenger ship that is to house and process them, in a bid to ease sometimes chaotic conditions onshore. 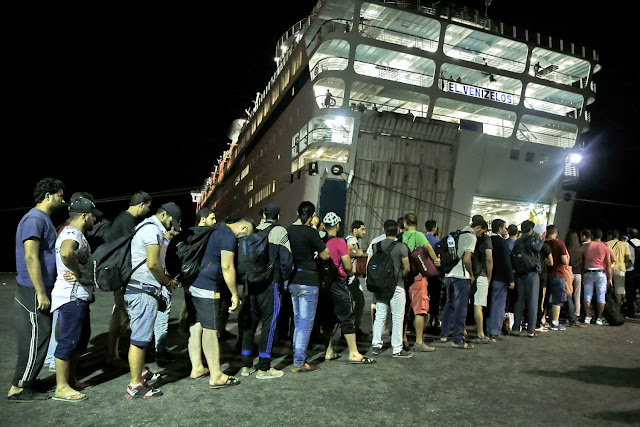 Syrian refugees prepare to board the passenger ship "Eleftherios Venizelos" at the port on the Greek island of Kos, August 15, 2015. The vessel will house more than 2500 refugees and migrants who entered the country from theTurkish coast and will be used as a registration center for migrants. Photo: Reuters/Alkis Konstantinidis

Greek officials had delayed the embarkation at the quayside in Kos for more than a day, working on plans to avoid disorder among the increasingly desperate migrants who have arrived on the island in dinghies and small boats from nearby Turkey.
The boarding of the car ferry Eleftherios Venizelos, which arrived in Kos on Friday, began in the cooler night hours in an organized and orderly fashion.
After some minor disagreements among the migrants over who would go first, they queued up on the quayside and boarded in groups of 20.
The ship, chartered by the Greek government, is to provide accommodation for around 2,500 Syrians in its cabins and an area for processing paperwork.
As the Syrians are fleeing their country's civil war, they are treated as refugees. This gives them greater rights under international law than those from other countries regarded as economic migrants who have also crossed the narrow sea channel separating Kos from the Turkish coast.
Nearly a quarter of a million migrants have crossed the Mediterranean to Europe this year, according to the International Organization for Migration. About half have come to the Greek islands, with numbers surging in the summer when calmer weather makes the voyage marginally less risky. A Syrian refugee holds his child in her arms as she sits in the port of the Greek island of Kos waiting to be registered and move with her family to the "Eleftherios Venizelos" vessel August 15, 2015. Photo: Reuters/Yannis Behrakis

The Greek government chartered the vessel - which belongs to a company which ships tourists, cars and trucks to the Greek islands and across the Adriatic to Italy - to take some of the pressure off Kos.
Several thousand migrants are staying in hotels on the island if they can afford it, but more often sleep in tents, abandoned buildings or in the open.
On Saturday, about 50 migrants from Afghanistan, Pakistan and Iran fought each other outside the island's main police station, throwing stones and exchanging blows as tempers boiled over in the intense mid-summer heat. They have little chance of getting aboard the ship as they have not established themselves as refugees like the Syrians, who have priority.
On Tuesday, local police used fire extinguishers and batons against migrants after violence broke out in a sports stadium where hundreds of people, including young children, were waiting for immigration papers. About 40 riot police were subsequently sent to the island to keep order.