US, other nations condemn 'barbaric' IS acts in Libya's Sirte

A+ A-
Print Email
The governments of America, France, Germany, Italy, Spain and Britain issued a joint statement Sunday condemning "barbaric" acts carried out by the Islamic State group in Libya. 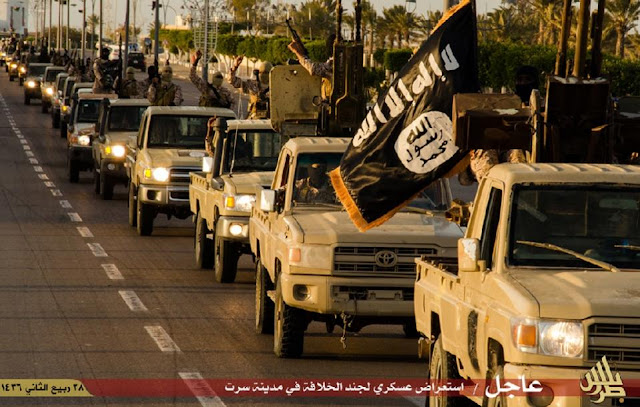 An image made available by propaganda Islamist media outlet Welayat Tarablos in February 2015, allegedly shows members of the Islamic State (IS) militant group parading in a street in Libya's coastal city of Sirte

IS militants seized control of the Libyan coastal city of Sirte in June and militants beheaded 12 local militiamen who had been battling them in the east of the city and hung their bodies on crosses, the official news agency LANA has said.
"We are deeply concerned about reports that these fighters have shelled densely populated parts of the city and committed indiscriminate acts of violence to terrorize the Libyan population," reads the joint statement released late Sunday by the US State Department.
The governments want parties in Libya "to join efforts to combat the threat posed by transnational terrorist groups exploiting Libya for their own agenda."
The situation in Sirte underscores the "urgent need for parties in Libya to reach agreement on forming a government of national accord that, in partnership with the international community, can provide security against violent extremist groups seeking to destabilize the country," the statement reads.
"There is no military solution to the political conflict in Libya," it adds.
Libya has descended into chaos since the fall of dictator Moamer Kadhafi in 2011, with two administrations and rival militias battling for control of the oil-rich country.
The internationally recognized Libyan government based in the country's east has asked for an extraordinary meeting of the Arab League urging Arab countries to "adopt measures to confront" the jihadist IS group.