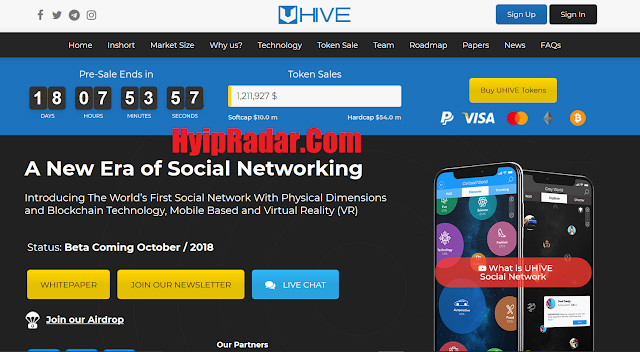 A platform designed from scratch to support Virtual Reality for VR enthusiasts.
As the first Social Network to incorporate physical dimensions, it offers users a completely new and innovative way to explore the social experience with their senses. UHIVE allows users to discover the journey for themselves, by walking thought infinite spaces, and visually identify what is worth exploring.
Physical dimensions give users' spaces in UHIVE a physical location in the network, and based on the user's engagement level, time spent on the app and some other factors, the user space will be more visible and attractive to other users, and this created a new marketing dimension, for example, if your space is near a famous space that has big traffic, most of the people visiting that space will see yours too, this will increase the value of your space location.
It also offers two unique experiences to all users, two worlds with different characteristics, “Civilized World” and the “Grey World”
The Civilized World and The Grey World. The Civilized World mirrors Earth, and is a cultivated network, governed by rules and regulations. Here, identities are real, and allow users to connect with family and friends, and meet new people.
The “Grey world”, a unique part of the social network which offers uncharted and uncontrolled space to users, where they can create their own spaces and be completely anonymous. A world that liberates the user experience and opens new chances for users to expand their imagination. This world is completely isolated and secured with a decentralized structure.

Users can have multiple profiles, one on the Civilized world and others on the Grey world. The Grey world is designed to bring freedom and to preserve users’ privacy to the maximum, and at the same time, it defines the thin line between people’s right to keep their activities and data private, and between making sure not to abuse the system and create illegal activities. With our innovative Hybrid Blockchain technology, users will have their identity, data, and activities totally secured and anonymous.
The HIVE Tokens, created to manage all means of digital trade in addition to rewarding all users based on their levels of engagement. HIVE Tokens signify the birth of a new digital era of economy, as they are fundamental in the transactional process for products, digital assets and services. Growth of the HIVE token value is relative to the the growth of the social network user base as the token is subsidized with an organic advertising revenue stream.

Release the App in 8 Different languages.
Release new updates and features.
Start working on our ADs (Advertisments) Platform.
Enter China with Partnerships with China biggest Cloud Providers and ISPs (A
New World for China).
Release new Updates and Features.
Release the App for another 10 Languages.
Release our Advertisement Platform Version 1.0.
Release XBOX and PS4 editions, where people can explore the social network.
Platform Updates.
Connect it with Smart TVs and many new IoT Devices.
Platform Updates.